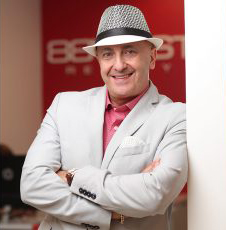 Alex Mozaffarian moved to Vancouver, British Columbia from Carmel, California in 1981. After leaving the United States, he completed his higher education with a degree from Simon Fraser University and started working in the Wholesale and Retail Sector.

Born in the well-known Mozaffarian family, that have been involved in the fine art of jewelry for over one hundred and fifty years, Alex’s father and grandfather were the jewelers of the late Shah of Iran. The Mozaffarian family own and operate numerous luxury jewelry stores around the world. Alex too has owned and operated several jewelry stores in Vancouver. Alex Mozaffarian is also the founder and past president of the British Columbia & Alaska sectors of Mercedes Benz Club of America.

Since 1985 Alex has been investing in both residential and commercial properties in Greater Vancouver. In 2005 Alex joined the real estate industry and since then has been successful in offering residential and commercial real estate and property management services. Through his strategic marketing plans and his expansive network of buyers and investors in China and Iran, Alex has a high success rate of listings sold earning him multiple Sales Achievement Awards from 88West Realty and Macdonald Realty.

Having watched and participated in the growth of real estate in Greater Vancouver for over three decades, Alex has developed a unique knowledge of it’s communities and has an intuitive feel for it’s real estate market. Honesty, integrity and dedication to his clients’ needs is the foundation of his success.

HAVE QUESTIONS?
WE’D BE MORE THAN HAPPY TO HELP.

Get in touch today!